About – A fact-based drama set in 1967 Detroit, US. Riots spread across the city for equal justice and equality. When a group of rogue police officers respond to a ‘shooting’ with retribution rather than justice on their minds.

The most fascinating aspect of Detroit is the harrowing truth behind this story, but this will be explained and looked into further throughout. This sickening story is told through the eyes of the victims, police officers and also by-standers that come in and out. As a viewer you will experience emotions from sadness, anger and even uncomfortable moments.

In these types of films, we usually see the camera angles being used in a normal standard, face-on angle. However, within Detroit the camera angles were used as if we were there. We see the journey of each character like we are beside them. This type of filmmaking is common today, however, this is done to a close-up experience making us closer to the action and the characters emotion. This brings a sense of realism to the footage, bringing realism into a true story is quite hard to achieve but Detroit does it brilliantly. 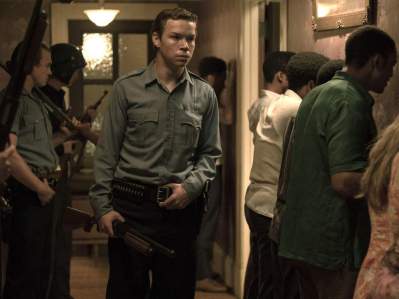 All acting was outstanding there were no flaws within these young males and females. There is one actor that stands out in all this, Will Poulter portraying Krauss, the evilest character I have seen in recent film. Will shows off his brilliant acting skills and doesn’t hold back in bringing such a wicked character out. He is the one that unfortunately carries this film, through his evilness and dark views on African Americans.

Detroit will bring you anger, sadness and an overall felling of guilt towards the African American community. Especially, on how some white people could treat other people like this due to the colour of their skin… even more upsetting and a realisation this is still happening today. Detroit wants us to feel these emotions and without failing, achieves this throughout the film. Especially, in the motel scene, where everything goes sour and horribly wrong for every character.

Everyone needs to see this film and then research into the events that happen during the film. It’s a sensitive subject, but a subject that needs to be addressed correctly and Detroit does this wonderfully.