About – A hunter helps an FBI agent in the investigation of a frozen murdered young Native American woman. He uses his tracking skills to foresee the truth on what happened on that fatal night.

Taylor Sheridan writer and director has done it again, his career just keeps getting better and better. Wind River is his third written film and let’s just say it’s his debut feature as a director. Taylor has written Sicario (2015) and Hell or High Water (2016). Both these films have been huge success from critics and from film lovers. Wind River lives up to Taylor’s filmography and it keeps on looking like it’s only going to get greater.

Cory (Jeremy Renner) is a hunter, who hunts down unwanted predators to keep livestock alive. Cory has a very dark past with a humble soul for the Native Americans. He stumbles upon a frozen body when he is out hunting for some lions. The FBI agent Jane (Elizabeth Olsen) is thrown into the deep end with having no understanding of the area and the weather. She is a vulnerable character yet a strong leader when it comes to her job. Cory and Jane work together by using their own skills to find out the truth about the murdered young Native American woman. 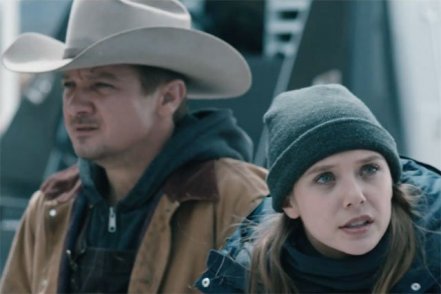 The acting in the first 20/30 minutes was very average, nothing in these first opening scenes blew me away. It was rather hard to understand what Jeremy Renner was saying, as for the majority of the time it sounded like he was whispering. Due to certain weather extremes within the film you expect him to have a stronger vocal. During and after the middle of the second act, it became more clear and easier to hear what he was actually saying.
The rest of the performances were amazing, especially Elizabeth who by the third act had shown exactly why she was part of the cast.

Wind River isn’t an action-packed thriller, it’s a dramatic piece of film that captives the harrowing truth behind Native Americans. There are some action scenes, which are heart racing and electrifying, these action sequences are truly mesmerising.

Wind River is a place where Native Americans live and barely survive, with no help from the government or the local police. The local police have six officers covering a vast area of land, making it hard for them to keep on top of all crimes. The place is cold, high up the mountain with barley any civilisation around it.

The establishing shots were amazing, they were visually breath-taking. You truly felt the coldness of the location, which made the wilderness feel part of the characters. With these types of establishing shots and within these small locations of civilisation, we familiarize ourselves with how cold and how real this location actually is.

Some of the shot fillers and camera angles were a waste and unnecessary. Shots of underneath a cow, through trees, side shots of snowmobiles and a slow pan of the frozen corps leg. These types of shots were all in the first act. They were pointless, which made us start doubting the film before its even begun. However, these types of shots disappeared, thankfully.

Wind River is fantastic. Don’t let these small flaws let the viewing experience down. The satisfaction of the end scenes is what film is all about. The ending is so fulfilling with having a statement fact about Native American Women it will leave you hollow.