About – A couple’s relationship and home are put under a strange and brutal test from unwanted and irresponsible guests.

Mother portrayed by the talented Jennifer Lawrence is restrained to her home and her other half ‘Him’ (Javier Bardem) who is a writer. We are introduced to these two working around each other, while Him has saviour writers block and Mother is restoring their home. When Man (Ed Harris) wanders into their home thinking it is a B&B, Him invites Man to stay due to Him needing inspiration for his next piece of work. Then, out of nowhere Man’s wife appears, Woman (Michelle Pfeiffer). She tries to belittle and manipulate Mother. A tragedy occurs and this ‘family’ disappears never to be seen again, then the two main protagonists were left alone in the house, but not for long…

Mother fell pregnant and this rejoiced Him of his writer’s block and enlightened him to write another ‘poem/statement/novel/passage’. When the ‘people’ knew what Him had written then his followers increased and started to invade Mothers home. This fame that Him received went straight to his head, which makes Mother not feel enough for him. This is where the narrative goes into a genocidal act and became the most violent and uncomfortable but thrilling moments within the film. Darren Aronofsky, the director and writer had to be at his most imaginative and realistic representation on humanity, religion and even mother nature herself to captivate this gripping journey that Mother (Jennifer Lawrence) goes on. 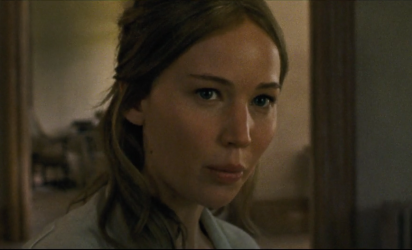 We all know Jennifer Lawrence for being in, The Hunger Games, Joy, Passengers and now her latest and best performance to date Mother! Jennifer shows that even a Hollywood actress at her calibre can put on a performance, like her life depended on it. Seven out of ten times, we see Hollywood actors not having passion or love for the character they’re playing. In this instance, Jennifer puts in the work and even makes us forget that its Jennifer Lawrence, it’s a superb performance by her throughout.

For this type of on-screen relationship from Jennifer, it wouldn’t be possible without the magnificent work done by the cinematographer, Matthew Libatique. Matthew has worked with Darren Aronofsky before in Black Swan. The way that Matthew made Jennifer’s performance be so visually pleasing, was by having the camera angles very close to her point-of-view or very close-up to her, so that we can feel and see exactly what Mother sees and does. By having shots from over the shoulder, her point of view, extreme close-ups and not moving an inch away from Mother’s face, always this experience to be special and real.

One element that Mother! doesn’t have is a score. There is a small debate whether there was one. Personally, there wasn’t enough non-diegetic sounds to be classed as a score. However, for the diegetic sounds there was enough of them to make hairs on the back of your neck stand up. Due to the silence and hollowness of the house, every creek and small movement outside of the frame makes us realise how captured Mother is, but also how realistic these diegetic sounds make the film feel that more genuine.

Understanding, that many people won’t enjoy Mother! due to its confusing narrative and its bizarre meanings and hidden messages. However, these reasons are the reasons on why I loved this film so much. The intellectual process that films like this does to us, is make us think about the connotations and unknown messages, otherwise these films don’t work. Mother! makes you think during and after, meaning it worked. Not getting it straight away means it worked. Having your own perception on the whole film or smaller details, means it worked. Arguing with my own statement, if you’re not a huge film fan or you just went to see a Jennifer Lawrence film because you like her work, then this hatred and disliking to the film is understandable.

Mother! is classed as a horror. However, the only horror within this is the fact that humanity has destroyed the planet and has showed us religion has caused many historical conflicts all around the world. Everyone’s initial thoughts and feelings towards Mother! is going to be totally different. You’ll either walk out loving it and then loving it even more after you have digested the smaller details. Or you’ll hate it but after giving it a little bit of time you’ll start enjoying the smaller elements within the film more than you realised.