About – A bus driver Paterson (Adam Driver) writes poems in his secret diary about love, passion, other women and the calm scenery he sits in while on his dinner breaks and walks home from work.

Paterson drives the number 23 bus around the New Jersey town of Paterson, this gets mentioned a couple of times, with the correlation of having the same name as the place he lives in. His life is really repetitive just like the way he writes his poems, just re-reading his work and progressing to finish a poem as the days go by. We follow Paterson on a day to day chaptered week from Monday to Monday, which sees him do the same walk to work and the same routine after work, taking the dog for a walk and going to a bar.

‘Paterson’ is a very slow but interesting film, which during you don’t mind but afterwards you start thinking about the smaller things like certain sentences of poems and characters that he interacts with. Without a doubt this isn’t for everyone it can be seen as a romance drama with no romance but only the words he writes down. ‘Paterson’ could have been cut down from the 113 minutes, there were certain parts of the film that were unnecessary  for the audience to know, we got insights into other characters lives when all that we needed was the life and quirky poems of Paterson himself.

It is like the director Jim Jarmusch wants to implicate and realise the audience that everyone has a passion regardless of their job. Their passion is something that will never go away but know they’re not good enough to get it out to the rest of the world, which is represented by the secret diary that Paterson writes in. Jim provides us with a sense of calmness which makes us fixate onto the life of Paterson and his day to day life, like we are watching someone we know. It also tells us that we should take interest in other people’s lives that have these same passions. This is represented through Paterson’s girlfriend, who is creative and wants to become rich but Paterson knows it will not go anywhere but loves the passion to succeed . 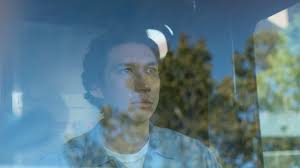 Adam Driver is far away from Kylo Ren in Star Wars. ‘Paterson’ shows what else he can do without the force. His acting is amateur like, like he isn’t acting at all, this sort of performance is very relaxing and easy on the eye. Adam Driver talks over the words that appear on screen when reading his poems, showing the different paragraphs while he is trying to make sense of the poem. His emotions are morbid and nothing special he has a very monotone voice that carries all the way through the film.

Just like in reality there is comedy, drama and always something that stirs the pot of life to make you go off course. Paterson really plays on these realities and it works perfectly to get the right amount of realism involved. Paterson has to go and maintain his life by being sarcastic and trying to be polite to his girlfriend. These are just some of the realisms that ‘Paterson’ gives us. The dog which is his girlfriend’s dog, is a very unique part in the film, while he is just a dog they always live the same life with no passion or desire every day just like Paterson, he is always sitting in the same spot in the house and on the curb when Paterson is at the bar. This alone shows there is other stories and meanings throughout the film and relating it back to Paterson’s life.

The score is very calming and humble exactly what a poetic drama film needs. There is no fast pace racing beats; it is like you are watching waterfalls crash down into a river, and this is exactly where Paterson always sits when eating on his work break. The score isn’t anything special but it sticks with you by the calming tone of the film afterwards.

Overall, ‘Paterson’ is a very slow film, it creates calmness to the audience that we need in 2016. Performances throughout the film are brilliant, nothing special again but it is something different that we get from Adam Driver before seeing him again in 2017 with episode 8 of Star Wars. ‘Paterson’ is something that you take away and think about the next day but straight away you feel like you wanted more but nothing ever comes, it’s nothing special but it’s an experience of calm.