About – A young wanna-be musician gets involved in an electric pop band led by a mysterious and strange man called Frank.

Frank is categorised as Drama, Music and Comedy which there is no question about it Frank falls into all of these genres. The only thing about Frank that really has questions raised and eyebrows is in the comedy element. For the first two acts you get the sense of all the characters have their own personality even though they’re all in this strange electronic pop band, which is nice to see having their own personalities whilst in this group. There is a lot of humour involved regarding all the characters for example when Don talks to Jon he told him a secret about Clara ‘did you know she was in a mental institute’ ‘was she? Well she is strange so I guess it’s true’ by this sort of humour/banter with each other it is this sort of humour that is thrown around the group all the way through the film. But there is a very big concern with the other comedy element that involves the character Frank, the humour from this character is random words and random actions which is comical and makes you giggle at times but there is a twist, without giving too much away in the third act there is something revealed about Frank which explains these random motions. Which threw me a lot because it took away the whole comedy element from the rest of the film, making you feel truly guilty for laughing in the first place in which how the film wants you to feel. Personally it was too much to handle which brought my thoughts of the film right down. Apart from this criticism everything else works really well regards to the humour element of the film.

The cast and characters were superb; all the cast members were incredible by delivering their own personalities to the character it was like these people actually existed. In this sort of film you have to care about the characters and their emotions which you felt with the main characters, Jon, Clara and Frank.
Jon (Domhnall Gleeson) is the wanna-be musician that gets involved in the electric pop band, he takes to blogging and twitter to keep a record of what he is doing on a daily basis and talks about his band members which eventually gets hits across social media YouTube & Twitter. He is doing this behind the backs of the other band members which doesn’t go down well apart from one member. Jon is the sort of character that is the witty person you have in your friendship group that wants to know everything even though he is the new member.
Domhnall Gleeson plays this role rather well, comparing him to other works like Ex Machina which he played a very similar character you could tell that in Frank he was this kind of person in reality, blogging when he was younger and using social media to get himself out there, which was nice to see an ordinary person being thrown into this madness.
Clara (Maggie Gyllenhaal) is a character that is very witty and controlling towards Frank. Her humour is very strange but very loveable when Frank keeps saying his facial expressions Clara shouts out ‘Stop saying your facial expressions out loud. It’s extremely annoying.’ Her emotion to this really sells the comedy factor to her witty comments.
Maggie Gyllenhaal is superb in this role, with her being a big actress at first I thought it was going to be weird seeing her in this sort of film but it worked so well her presence was magical on how she played this role, it was like watching someone new but you’ve already met before, that I know is a weird combination but with her character being witty and controlling Maggie makes sure that her well-known factor doesn’t get in the way of this performance.

Frank (Michael Fassbender) is the lead band member in this electronic pop band; his adventure is to find the perfect sound for the album that no one would ever think of. Frank is a very loveable character you don’t really have that much care for because of the massive fake head so you can’t really see his emotion and have that connection with him. He is a very funny character the humour is strange, random words and actions which is funny and really relates to the music that is being made by him.
Michael Fassbender is actually only seen in Frank for a few brief minutes, but you don’t have to see him due to the intimidating head that he wears. Michael’s actions throughout the film really makes Frank really believable, he knows how to get inside the head of the character and how that person would really react while in certain situations which is exactly what you want to see during Frank. 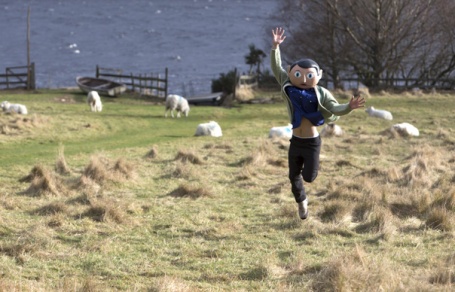 Cinematography is one element in a film that I love and when it’s done correctly it’s even better. Franks Cinematographer is James Mather, I don’t know too much about James but if I was going to comment on his work regarding Frank it would be incredible. Every shot felt like you was actually in the cinema; this sort of experience is what film is all about in my eyes. It captured the raw emotion from all the characters getting up close and personal to everyone involved which is exactly what Frank is all about. The band members are on island off Ireland James really captures the beautiful location with the hills and the lake. Capturing these shots when the sun is just right having the glare of the suns rays while something random would be happening in the foreground of the film. Making you place yourself exactly where the characters would be standing that puts you in the frame of this madness.

The non-diogetic sounds don’t get mentioned enough in reviews, due to them not being a big part in a film. But with Frank the only way to describe the non-diogetic sounds is like happy jingles throughout. They really brought the film together but having situation when Jon and Frank were talking or going through a stage of trying to create the perfect sound for the album. The jingles were fitted perfectly and worked so well that you could think that the jingles are part of the album it was that satisfying to listen to. This is what Frank is all about a happy jingle with humorous characters which was perfectly put together by Stephen Rennicks who knew exactly what Frank was all about to the audience.

Frank is one of those films that is a strange random experience, with a twist that made you feel guilty for laughing. The whole point of the first two acts was for your entertainment but in the last act made you reconsider why you was laughing in the first place. The cast and characters were again incredible. The cinematography was second to none with the perfectly shot scenes with the mix of non-diogetic sounds fitting perfectly together making Frank a brilliant film by Film4. There is a part of me that wished I had a different mindset while watching but this is how I read the twist at the end, which brought the film down a lot from my first reaction. Frank is a great young film for viewers that want to get into music and how they could do this work without a care in the world of what people think of it.